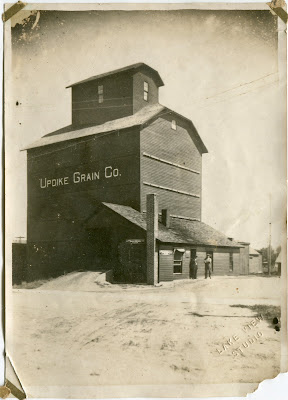 This old photograph, produced by the "Lake View Studio" (where that was, I have no clue), of an Updike Grain Company elevator sent me on a very unexpected journey, exploring some of the fierce legal and political battles brought on by federal government meddling in the markets that wracked the grain farming industry at the time of the Great Depression.

The Updike Grain Co. was a large grain storage and trading company, headquartered in Omaha, Nebraska, and which operated grain elevators throughout the mid-west. Nelson Blackwell Updike (b. Dec. 2, 1871 Pennington N.J.) first bought a grain elevator in Eldorado Neb. shortly after his marriage in 1895. With the success of that elevator, he began to purchase more country elevators, and built terminal elevators in Omaha. He incorporated the Updike Grain Corp. in Omaha in 1899, and became a member of the Chicago Board of Trade's grain exchange in 1900. In 1903 Updike helped found the Omaha Grain Exchange with several other local grain company owners.

When the Union Pacific Railroad tried to use a tariff rule loophole to deny payment for grain storage to Updike and several other companies, Updike sued, and the case made it all the way to the U.S. Supreme Court. The judgment was decided on December 4, 1911 in favor of Updike, with Justice Lamar writing the opinion of the court.

In the court's decision, an important principle of fair commerce was elucidated: "The carrier cannot pay one shipper for transportation service, and enforce an arbitrary rule which deprives another of compensation for similar service. To receive the benefit of such work by one elevator without making compensation therefore would, in effect, be the involuntary payment by such elevator of a rebate to the railroad company, for it would enable the railroad to receive more net freight on its grain than was received from its competitor located on the railroad's tracks. This cannot be directly done, nor indirectly by means of regulation. A rule apparently fair on its face and reasonable in its terms may, in fact, be unfair and unreasonable if it operates so as to give one an advantage of which another, similarly situated, cannot avail himself."

In 1917, N. B. Updike dissolved the corporation and became the sole owner of Updike Grain Co, and at some point, the company's headquarters were moved to Chicago.


In the 1920s, farmers were hard-hit by wildly fluctuating market prices, driven by commodities speculators. This resulted in Congress passing the Grain Futures Act in 1922. As the nation's economy started to implode in the late 1920s, Congress also passed the Agricultural Marketing Act which established the Federal Farm Board, commissioned to stabilize commodities prices and thus halt the downward spiral of grain prices which threatened to ruin America's farmers. The effort was largely a failure.

In order to take advantage of price subsidies, the Farm Board required farmers to join production cooperatives, and in 1929 established the Farmers National Grain Corp, a quasi-public, government-funded entity described in court documents as an "association of cooperative associations". Rather than building an extensive infrastructure of its own to facilitate national trade in grain by the member cooperatives, FNGC purchased existing companies, including in 1930, the Updike Grain Co. This purchase, allegedly done secretly, brought two important assets to FNGC: its large chain of grain storage elevators like the one shown in our photo, and its seats on the Chicago Board of Trade and the consequent membership in the grain exchange (more on this in a bit).

That same year, the Federal Farm Board and FNGC established the Grain Stabilization Corp. in order to protect farmers from wildly swinging grain prices brought on by speculators and commodities traders. The Board was Pres. Herbert Hoover's method of establishing a means of federal regulation of crop prices. GSC was run by farmers' cooperatives, but fully funded by the Farm Board (meaning the government). To increase farmers' income, the GSC was allowed to buy and sell grain on the open market, with FNGC acting as its broker, and it set out to corner the market on grain, buy up any surpluses, and thus drive up the prices. This created a raft of unintended consequences (some of which are discussed in this article), and by 1933, with the nation deep in the Great Depression, the Farm Board decided that it had helped the farmers as much as it could, and GSC's stockpile of grain was slowly sold off. This was completed by April 29, 1933. 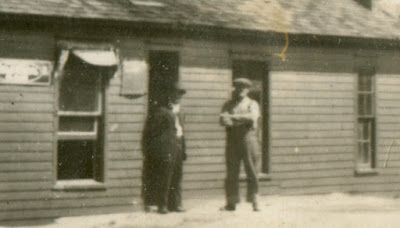 The adversaries of the scheme was The Chicago Board of Trade, which  was described by Rep. Strong in 1932 as "the world's greatest wheat gambling rendezvous." (Chicago Tribune, May 25, 1932). Politics created a fair amount of enmity between the government and Farmer's National and the Chicago Board of Trade's grain exchange. Updike had been a member of the exchange since 1900, and its executives held two board seats, and FNGC used Updike's membership to clear its trades.

But in 1931, the Board of Trade changed its rules to exclude government owned and subsidized concerns, and Updike's membership was suspended. Charges flew that this was the traders' attempt to undermine the coop and price stabilization movements (with stabilization, speculators can't easily manipulate the market and make their huge profits). The Board of Trade decided that for a company to trade on the exchange, it had to have at least two company executives on the board, and they could only be members if they owned stock in their company. Because the two Updike executives no longer owned stock (since it was now a wholly-owned subsidiary of FNGC), they were thrown off the board. The rules by which FNGC was established stipulated that its stock could only be owned by farmers' cooperatives, and not by individuals, so this excluded FNGC from joining the board and the exchange under its own name. Without membership in the exchange, FNGC could not clear trades, and thus could not market its member coops' grain. T

FNGC appealed to the Grain Futures Commission, who sided with FNGC and suspended the Board of Trade's "contract market" designation (some of the legal arguments can be read here and here) in 1932. After more legal maneuvering, and a failed appeal by the Board of Trade to the U.S. Supreme Court, they relented, changed the rules and finally granted FNGC membership in the clearinghouse.

It's hard to determine when the Updike name disappeared. After 1932, it was no longer needed by FNGC to trade on the exchange, but how long it continued to be used at the local level with the various grain elevators is not clear. FNGC consistently lost money (except for the years that it served as broker for the Grain Stabilization Corp.) and it went bankrupt in 1935, but was bailed out and operated by the Farm Credit Administration; the reorganization wiped out $14 million in debt. In late 1937, its grain marketing operations were taken over by its constituent regional cooperatives and as a corporation, it was dissolved by its shareholders in January 1938. The Farm Security Administration subsequently made loans available to farmers so that they could buy shares in their local coops, which then could revive the elevators, many of them former Updike Grain Co. elevators, that had once been operated by the FNGC. In place of FNGC, the National Federation of Grain Cooperatives was formed.
Posted by Unknown at 5:00 AM

This blog is an exercise in remembering a time different than our own. It was a time of our forefathers and mothers, it was a time that seems extraordinary to us, but was quite ordinary to them.
Take a minute and stare at these photos, ponder what it must have looked and felt like to have been there. Come rediscover forgotten memories and render them lost no more.
Our Schedule
Sundays: Main feature photo
#MotorMonday: Our love affair with cars and trucks
#ThrowbackThursday: 1st week: buggies, 2nd week: School photos, 3rd week: Our House, 4th week: Down on the farm
#FamilyPhotoFriday: Self explanatory
Some Saturdays...mystery photos that I need help with identifying